History of the American Barbershop 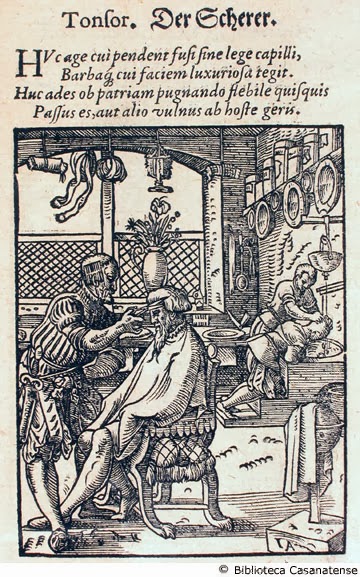 Most men visit barbershops on a regular basis, but many do not know the history of the "American" barber trade itself, nor do they know how it came here to America. Long before the Europeans passage across the Atlantic into the new land known today as the United States, the role of a barber was one that consisted of more than just merely cutting hair or shaving ones face. In fact, dating back to ancient times, barbers were highly respected tradesmen. While barbershops were often, as they are today, the sanctuaries for men seeking an escape from everyday stress, they could also converse with fellow men, joke, laugh and talk freely with one another without self-consciousness.

The trade of a barber traces back to some of the oldest proven artifacts of mankind's existence.  Ancient Mesopotamian, Sumerian and Egyptian relics that have been unearthed have depicted barber's tools such as razors and carvings of items such as today's modern day scissors, used for cutting or shaving mens hair and beards.  In ancient Greece, patrons would visit an agora, which is what would be considered an original type of barbershop where men gathered to have their beards trimmed, shaved, hair cut or finger nails trimmed while associating with one another and listening to local gossip. In Ancient Rome, a daily visit to the tonsor was what all men did for a clean shave. It was even considered a "rite of passage" or coming of age experience for a young boy to have his first visit to the tonsor.  Asia had it's own form of barbers who shaved their heads into certain hairstyles for their culture. India also had it's own barbers who sat on the street where they trimmed their patron's hair. History proves that even in the Middle Ages, barbers served as also dentists and surgeons, thus earning them the names "barber surgeons."

The Mirror of Literature, Amusement and Instruction (published Circa 1824; London) states: 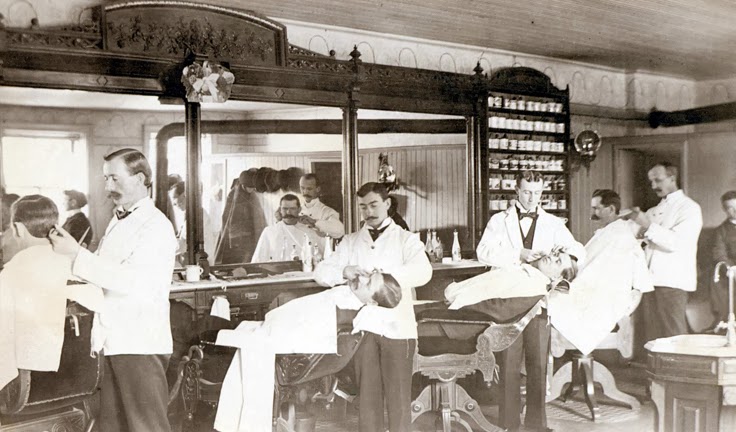 ---" It appears there were no barbers at Rome, before the year A.U.C. 454. Varro reports, that Ticinius Mena brought them thither from Sicily. The barber's shops very soon became the resort of idlers and gossips. Besides curing the hair and shaving their beard, the ancient barbers also trimmed the nails. Anciently, a lute or viol, or some such musical instruments, was part of the furniture of a barber's shop, which was then frequented by persons above the ordinary rank, who resorted thither for the cure of wounds, or to undergo some chirurgical operations, or as it was called, to be trimmed , a word which signified either shaving or cutting and curling the hair. These, and also letting of blood, were the ancient operations of the barber surgeons. The musical instruments in this shop were for the amusement of waiting customers, and answered the end of a Twopenny Mirror,  with which it is now usual for such to entertain themselves. The naivete of modern barbers is well known to the inhabitants of this metropolis, and we have only "to walk into their shops and see, what witty fellows these shavers be." 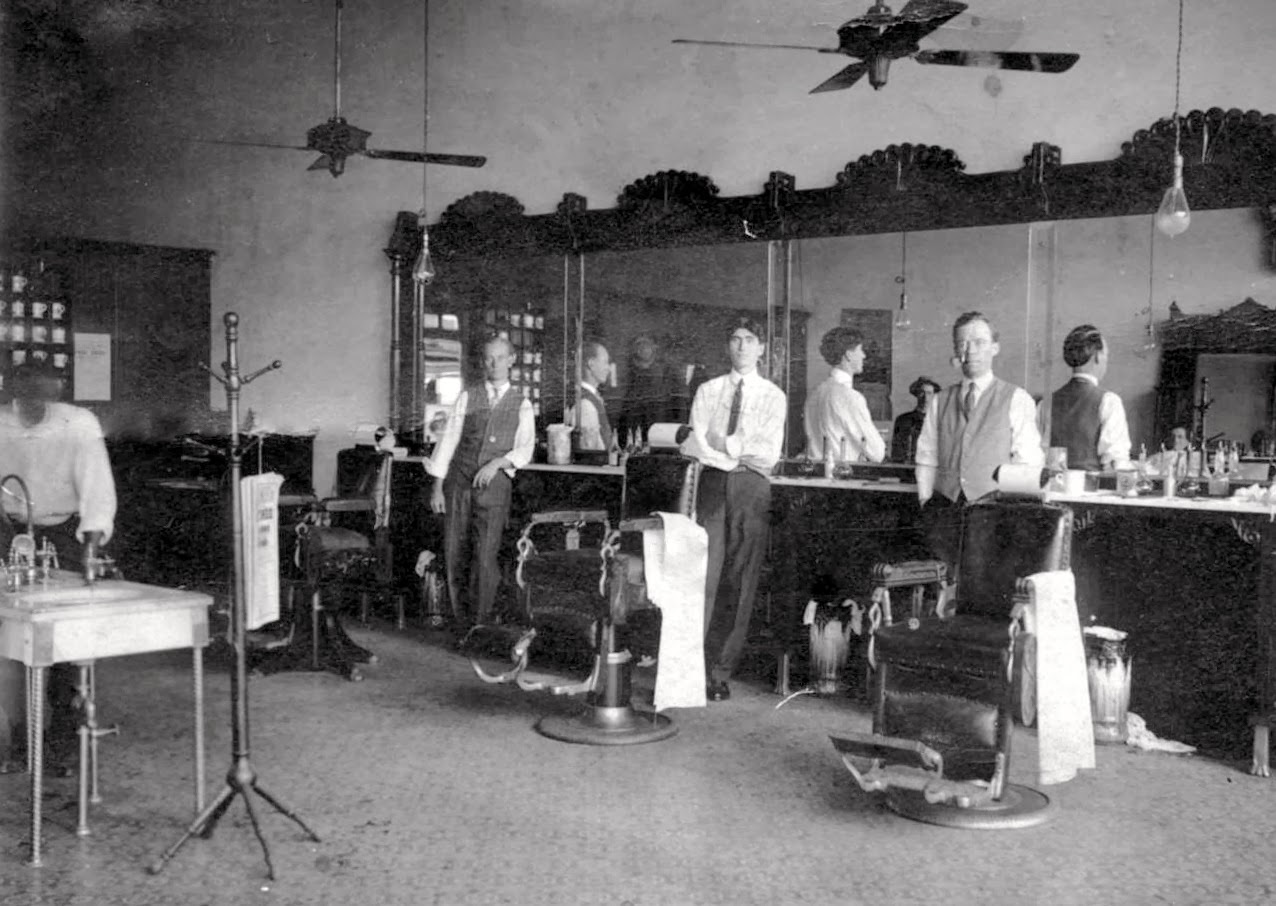 It goes on to say, "The origin of the "barber's pole" has been subject of various conjectures among etymologists. Some have supposed it to have been derived from the word poll, or head; but, the true invention of this party-coloured staff was to show that the master of the shop, practiced surgery, and could breathe a vein, as well as take off the beard; such a staff being to this day, by every village practitioner, put into the hand of a person undergoing the operation of phlebotomy. The white band which encompasses the staff, was designed to represent the fillet, thus elegantly turned about it. "---

In fact, as it states above, the very origin of the barber pole posted outside of nearly every barbershop which features the red and white spiraling stripes, dates back to Europe. Another one of the gruesome services a barber-surgeon would offer was the extracting of teeth. Whether he was applying leeches to a customer, delousing a lice infested patron, or performing bloodletting, once he was finished he would wrap the bloody bandages around the customer and later wash out the bandages and hang them on the white pole that sat outside his place of business.  The wind would cause the bandages to wrap around the pole, leaving bloodied red stains. During the centuries up until 1300s, the a barber would take the blood from his customer and place it in a bowl on an outside window so that passersby could see, hoping it would draw attention and attract more customers for bloodletting. By 1307, a law passed prohibiting the displaying of blood in the window, and forcing the barber's to dispose of it in the river for cleanliness issues. Eventually sometime around the 1500's the poles outside were painted red and white to signify the older practice of the barber-surgeons bloody bandage hanging. It is often thought that the addition of the stripe of blue, most commonly found on an American Barbershop pole, is because of the colors of "Red, White and Blue" from our nation's flag.


During the mid to late 1800s, was when free African-Americans took to the trade and became successful with it. Historical facts prove that when European immigrants moved to America, they brought their own culture and their own ways of life with them, including trades such as barbers, doctors, cobblers, blacksmiths, bakers and so forth just as they had in the "old country" in Europe.
Nearing the time when slavery would be abolished in the late 1800s, this was when free African-Americans assimilated into the American culture by learning an existing trade from the established immigrant barbers who brought this trade to America. Becoming a barber was an easy trade to learn and a lucrative one at that. Everyone needed a haircut or a shave, so this proved to be a successful trade for former slaves and later generations to learn. It was even stated in The Southern Quarterly: A Journal of The Arts In The South, that "one out of every eight African American in the Upper South, was worth at least $2000 in 1860. And the standard for affluence at that time, owned a barber shop." Many sites claim that African-Americans brought the barber trade to this country by way of the slaves, but this is not historically accurate and history proves this. The fact is that they took on a trade that had already been in existence in America and abroad.

BACK TO BARBERSHOP HISTORY & THE BEGINNING OF
BARBERSHOP QUARTETS

Whether Caucasian or African-American, the barbershops of the late 1800s and the 'turn of the Century' flourished with modern day conveniences becoming available such as electricity. The barbershop continued to be a gathering place for men, just as it was in the days of Rome and Greece, to talk freely to one another, enjoy themselves and catch up on local gossip all while being serviced by a barber. 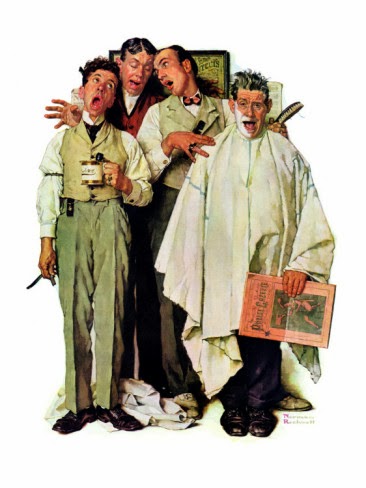 During the late 1800s and turn of the Century, it was commonplace for men to break out into song while sitting there waiting for customers to come in for a shave or haircut. Sometimes the barbers would step outside in front of their place of business and begin singing to draw attention to their shop, hoping to get oncoming passersby to stop in and get a shave. This was the beginnings of what you would call "barbershop balladeers" or "barbershop quartets" which really originates back to "Glee Club" which traces back to "Choir" in the church which also originally came from Europe (ex; A Capella, "in the manner of the church".)*

The term barbershop quartet didn't even come about until decades later, after the trend died down. At the time when men would sing together in harmony at the barbershop, they were singing folk songs, minstrel songs, spiritual hymns of the time or of times past, together for fun and were often just referred to as "quartets." As time went on, people started writing their own songs and singing them in that style and so they contributed into making "barbershop quartet" singing a style of it's very own.

*In my next article we will go more in depth about the beginnings of Barbershop Quartets!