The Dark History Behind The Nursery Rhyme- "Mary, Mary" 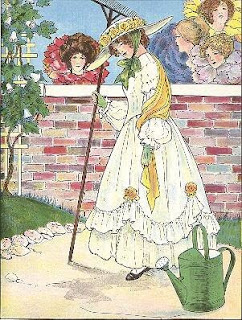 One of my all time favorite Mother Goose Rhymes, "Mary, Mary, Quite Contrary" actually isn't such a lovely story if you dive into the dark history behind the rhyme. You see, as a child your mother may have read that poem to you lots of times and you may have envisioned a beautiful lady walking around her garden with pride. Showing off her beautiful spring blooming flowers for all to see, with her "silver bells" and "cockle shells" and "pretty maids" as flowers with women's faces on them. But in actuality this poem, like many Mother Goose Rhymes has a dark and sinister meaning.

How does your garden grow?

And pretty maids all in a row"- Mother Goose Nursery Rhyme


The Mary that is portrayed in this nursery rhyme is none other than Mary Tudor, also known in historical infamy as "Bloody Mary". Mary was the daughter of Henry VIII and Catherine of Aragon (the first wife of Henry VIII). It seems that in an attempt to break away from the Church of England, she tried to revert back to the Catholic Church as soon as she became Queen. It was said that she persecuted and murdered many Protestants. Her reign of terror became widely known over the course of history, thus giving her that well deserved title of "Bloody Mary".

There are several interpretations of what people think the meaning of the poem was. Some say that the silver bells stood for Catholic Cathedral bells, the cockle shells stood for the pilgrimage to Spain and the pretty maids in a row stood for a row of nuns.


Others claim the meaning was about torturing her victims. Silver bells stood for thumb screws that were torture devices, cockle shells that was a genital torture device and the pretty maids in a row stood for the people lining up to be executed by the Halifax Gibbet, which is the same as the guillotine. This interpretation I believe to be the real one, as the meaning of "How does your garden grow?" is said to refer to the cemetery, being that the more deaths, the more the cemetery "garden" would grow.

As with all the interpretations,  the mystery behind which one is the true origin still remains.

It is very interesting to think that in that time period that people had to preserve history any way they could. If it meant they had to write a song or poems in order to pass down the truth that perhaps the leaders of the Country tried to cover over then that's what people had to do. I find it rather clever that many of the Mother Goose nursery rhymes have so many double meanings and all it takes is a little research to uncover the truth behind these bed time tales!


All the content that is published on this site under my profile DREAMING CASUALLY © is my property and is protected by all applicable Copyright Laws. No part of my work may be reproduced, stored in a retrieval system, or transmitted in any form or by any means without prior written permission from me, the publisher/author J'aime Rubio.
Posted by J'aime Rubio, Author at 5:16 PM