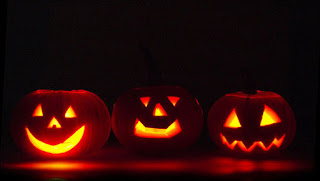 Halloween- a night that millions, maybe billions of people celebrate each year, but do you know what it is you are celebrating? Many people associate Halloween to a time of fun, play and excitement. It’s a  night when you can be anyone, and sometimes get away with doing almost anything. But where did all the creepy, spooky stuff that makes up this holiday come from?

An ancient pagan festival of the dead that actually originated even further back in time by the Druids who worshiped Ba’al  a false god (or pagan god) that dates back to Ancient Babylonian and Sumerian beliefs just a few hundred years after the flood of Noah’s day. During this time the people who worshipped Ba’al offered their own children into the fire as a sacrifice to their pagan god.

Later this day was celebrated by the Celtic people of Europe, It was a time when their calendars marked the end of the Harvest and the beginning of Winter. Samhain (pronounced Saw-ween) was the most important holiday for the Celts. They believed that during that time that the souls of the dead could “cross over” to the world of the living. To appease these spirits, they offered burnt sacrifices of animals, and other organic means (vegetables, fruits, etc.)

The bonfires were then lit to keep the spirits away from the living, but also to honor them. They believed that not only ghosts but demons and nymphs and fairies were among those crossing over from the other side that night. They believed that you must trick these spirits, as they could take over your body and steal your soul, so many would disguise themselves in costumes of sorts thinking that they would fool the dead (a probable link to origins of today’s Halloween costumes).

In 601 A.D., during the time of Pope Gregory the First, in order to eradicate “paganism” in their own way, the Catholic Church decided to conform their beliefs and add to the Catholic doctrine also some pagan inspired beliefs, thinking that pagans would then convert to Catholicism. What ended up happening was that Pagan worship days then were converted into “Holy Days” that the Church had, basically intermingling two different sets of beliefs and merging into one. One good example of this holiday “merger” is that of Christmas where the Catholic Church decided to say that Jesus was born on December 25th just because it was the same day that pagans worshipped the “SUN”, so in essence they figured that people could just worship the “SON” instead.

Originally, the “Holy Day” that Catholics celebrated as All Saints Day was not in October or November at all. In fact, the original date was on May 13. This was originally established by Pope Boniface IV, in the seventh century. But by the eight century, Pope Gregory III decided to move All Saints Day to November 1st to counter act the Pagan holiday of Samhain that fell on October 31st.  Eventually, the church started adding pagan traditions into the holy day activities and festivals, thus convoluting the very purpose of the holiday to begin with. The day of November 1st was also referred to as “All Hallows Day” leading the night before to be known as “All Hallows Eve”—later shortening it to “Hallows Eve” and even shorter to “Halloween.”

November 2nd was a day to celebrate as All Souls Day, a festival of the dead. The purpose of All Souls Day was that during that day the living would pray on behalf of the souls left in purgatory. During that time, it was the belief that after so many prayers were said for a soul, that they would be released from the confines of purgatory and go straight to heaven. Again, these are not really Christian based beliefs, as the Bible has no mention whatsoever about purgatory or about prayers sending a soul to heaven.

During Medieval times, people would bake little spice cakes with raisins and offer them to the children or young ones who would call on their doorsteps offering to pray for the souls of their departed loved ones. This was often referred to as “souling.” And yet, just another one of the many facets of what we know today as modern day “trick-or-treating.” However, the term “trick-or-treat” has only been around about 100 years or so, and we will get into that subject a little bit later.

Hiding Behind the Masks-

Another tradition from the past that ties into today’s Halloween was the use of masks.  In 17th century England the use of masks was one used in masquerade balls and even on such days like the infamous “Guy Fawkes Night” where the rowdiest and most destructive occurrences would happen all over the land.  Although the Puritans who later came to America tried their best to rid themselves of pagan and most intemperate habits, still many who came over to the U.S. brought along with them the desire to carry on these traditions.

By 1833, there were historic records that show there were people at the time having parties and celebrations that mimic the Halloween we know today, to an extent.  Another dark turn for the holiday came during the Civil War, when so many young men died such tragic and horrific deaths that people then became obsessed with death. It consumed them, it was all around them at all times. It only seemed a matter of time before that macabre thinking would manifest itself in the minds of the young to start creating the “Urban Legends” or basic “Ghost Story” tales that are so famously known today. Another facet of the Halloween tradition was then added in the mix.

Another note: The Irish and Scottish immigrants who had come to America earlier, had brought with them the ideas of the Bogey's or "Boogey Man" along with the ghost's in white sheets or shrouds haunting in the night. Over the years the addition to ideas of monsters, vampires, zombies and of course three of the biggest symbols of Halloween- the witch, the black cat and bats continued to penetrate the dark holiday, making it even more creepy.

The origin of the Jack-o’-lantern is one that comes from Gaelic traditions (English, Irish and Scottish). The stories, although there were many, all basically told that Jack tricked the Devil and made him agree into not keeping his soul. After Jack died, since he was bad, he didn’t go to Heaven- but, since the Devil made a deal not to take his soul, Jack was forced to roam endlessly in the darkness of the “in between.” So the Devil, feeling sorry for Jack, scooped up an ember from Hell and placed it in a hollowed out turnip which Jack used to light his way through the dark.  The act of carving out faces in the Pumpkin originated with the reminder of the dead by carving a face of a skull on the outside, thus the real face of a Jack-o’-lantern really does represent death. 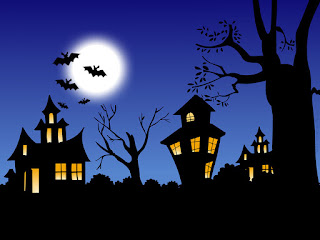 When you think of “trick-or-treating” you think of dressing up, going door to door and asking for candy, do you not? However, the American tradition of this door-to-door activity actually started with a bribe. You see, during the Great Depression, kids didn’t have a lot to do and life was not very enjoyable. Halloween night was a night where the rowdy kids could get together and under the cover of darkness they could wreak havoc in their own neighborhoods. Unfortunately, the adults, the authorities and the community did not like the outcome of that. Kids were vandalizing homes, cars, setting fires and just plain playing practical jokes on people all night long. Some of these pranks proved deadly.

It got so out of hand that community members along with schools decided to come up with the idea to have social 'get-togethers' at Town Halls or even certain homes to keep the kids indoors. Later parents came up with ideas for “costume parties” and even later the idea of  “trick-or-treating” came along when certain homeowners would bribe the bad kids in the neighborhood with goodies in exchange for the promise they wouldn’t “prank” their houses. It caught on quick and the custom of going door-to-door for candy was then born.

Conclusion
So you see Halloween started as an ancient dark custom to a merged custom of pagan and Roman Catholic beliefs, then was thrust from a dark and depressing sort of holiday and made into one that many enjoy today. With that being said, one must remember that although the exterior of the Holiday may be enticing, inviting and even enjoyable, you need to remember what it is you are really celebrating. The day of Samhain is still October 31st, the day that the pagans worshipped the dead. Also remember that even before the Celts, the Druids worshipped the their ancient pagan deity Ba’al on this day as well, even going so far as to offering up their children as sacrifices to this false god. So in ending, I hope this gives you a little more insight on the origins of Halloween.

(Copyright 2012- Origins, What Does History Say) by "Dreaming Casually"