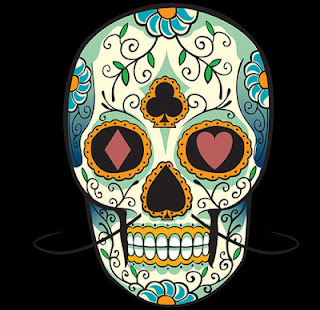 During this time of year, many people tend to be interested in the darker more scary stories and even histories of many basic legends or folklore. Tonight, I decided to write about a common Mexican-American belief that has carried over from Mexico and into the diverse culture we find here today in America. When I research stories I find interesting, I truly do my best to work diligently for the answers. Even when I don't like what I find, I still try to make sense of it and I post it for others to become more educated about other cultures beliefs.

The Day of the Dead, or as it is known in the Hispanic culture “Dia De Los Muertos” was a ritual practiced by the indigenous people of Mexico and South America for thousands of years prior to the encounter with the Spanish Conquistadors in 1519.  However, if you really look into it further you will see that the celebration that is practiced today, is more Catholic based than you would imagine. For being a ritual from an indigenous origin thousands of years prior to the Spanish Conquest, it sure doesn't look that way today. The origins of this celebration dates back at least three thousand years to the Aztec and Meso-American civilizations, however it seems unlikely that the way they practiced it then is as it appears in today's culture.
When the Spaniards first noticed this longstanding tradition from the native people they believed it to be an abomination and sacrilegious for their practices to honor Miccailhuitontli and Mictlatechutli.

The Spanish immediately tried to eradicate any trace of the native people’s polytheistic beliefs, including their many traditions and rituals- as the Spanish believe they were barbaric and heathens for their "pagan" practices.

After forcing the natives to convert to the Roman Catholic Church, they destroyed temples of worship the natives have built for their gods. One in particular was a chapel for their goddess Tecuatlanopeuh which they rebuilt and blessed as a chapel to honor the Virgin Mary. The natives then began incorporating Roman Catholic idols such as Mary and combining them with that of their “Mother Goddess” Tecuatlanopeuh. It is known that the name of the “Virgin de Guadalupe” is actually more than likely a misinterpretation of the name Tecuatlanopeuh being the pronunciation of the name and "Guadalupe" is similar. This lady, "La Virgen de Guadalupe" has been long since associated as the second-coming Virgin Mary who was reported to have appeared in 1531  (note: this is the same year the story of La Llorona became known).

Skull Decorating-  As far as the festival of “Dia De Los Muertos” goes, carved and decorated wooden skulls were symbols of the ancient trophy skulls displayed in the ways of their ancestors.  The indigenous people believed that during the ninth month of the Aztec Solar Calendar (August), that the souls of the dead came back from their place of rest in the afterlife. They  celebrated the lives of their lost loved ones during that time, believing that their souls had come back in a spiritual state to be close to them. Nowadays, the traditions to honor the "ancient trophy skulls" have changed into the practice of decorating "calaveras de azúcar," better known as "sugar skulls".

Face Painting- The Aztec culture believed that life on this earth was more of an illusion, thus death was just another step forward into a higher level of consciousness.The skulls represented a positive symbol, not only of death but of rebirth.


Because of this belief, the culture of Mexico has continued to merge that original belief system  with that of both societies, the indigenous people and that of the Spanish. However, remember that the Spanish did not have or want anything to do with the indigenous “pagan” practices of the native peoples and yet, today whenever you see any sort of “Dia De Los Muertos” idols, symbolism or even decorations there is always some deep rooted Catholicism mixed in with it.

Interesting isn't it? The shrines, amulets, crosses and decor, all of which are Catholic inspired themes, would have never been something the indigenous people of Mexico would have  used. Also, remember that the Spanish didn't believe in this celebration and thought of it as sacrilegious- so do you really think they would approve of this celebration today?


So you see, the Day of the Dead's origins truly had no form of Catholic symbolism back then, as it does in today's celebrations and festivals. The indigenous people had their beliefs ripped and torn from them and forced to convert into a newly appointed "religion" and belief system that was so foreign to them, thus corrupting and diluting their original cultural belief systems and turning them into the mixed celebration we see today.

Personally, keeping the origins in mind, one would see that the two ideas being merged into one is really something neither side would have ever accepted.-  Just something to think about....